San Romedio’s hermitage from earth to the sky and back

Every Nonesan person knows it and every tourist was suggested to visit the place, absolutely not to be missed. Because San Romedio isn’t just an ordinary sanctuary.

No, San Romedio is different from what you imagine thinking about a sanctuary. It’s a complicated architecture, built (almost) from the top to the bottom, starting from the highest point, a 90 meters rocky spur; many trekking roads and paths through the woods end in its large square; in the quiet days it seems like you are brought in a different time or dimension, and in the busy days children’s voices are full of joy and amazement.

It’s not just a sanctuary like the others, it’s one of those places that makes you understand why the arts are a resource for everybody, that you don’t have to be religious to appreciate how extraordinary and charismatic this place can be.

Probably, when you see San Romedio for the first time you wonder if it’s a building, a church or a castle. The question is legitimate because the sanctuary lifts its architecture towards the sky and in a quite tapered way, it reminds you of a castle. 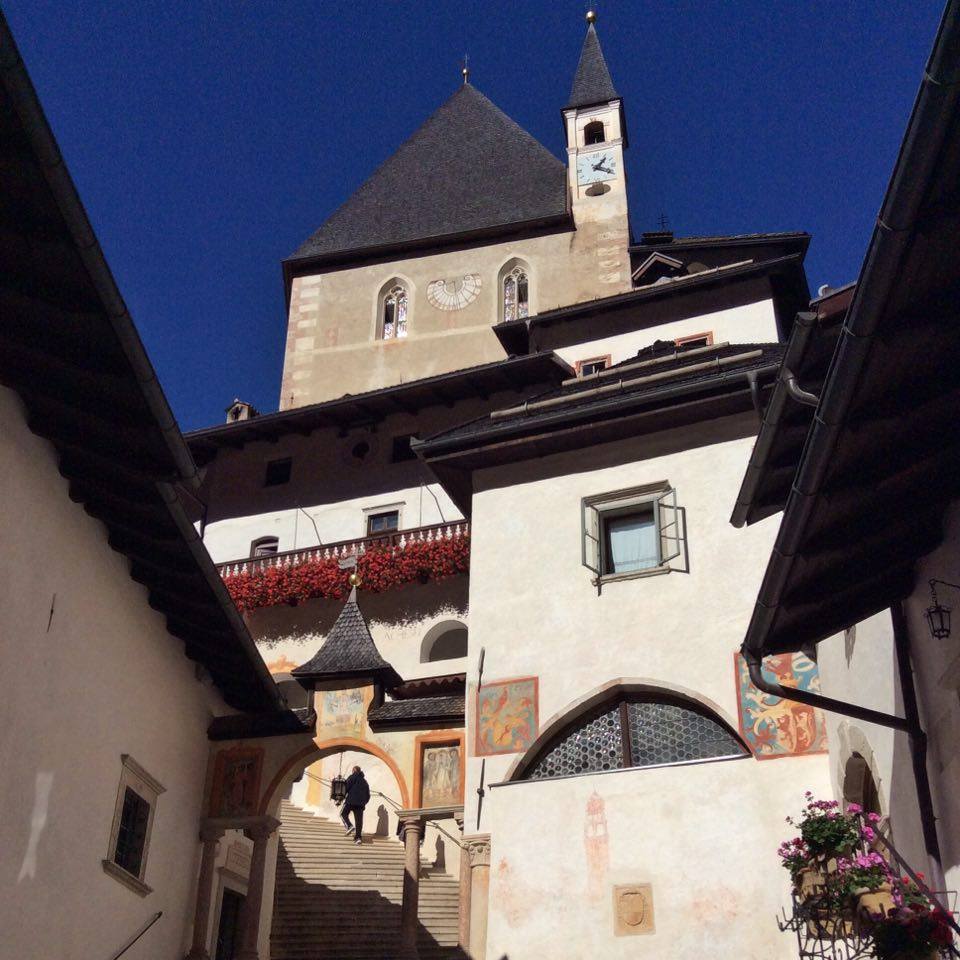 The reality is that the architecture of the sanctuary evolved in different periods of time and in a particular way, almost from the top to the bottom. The guest has to follow some kind of path back in time, from the most recent buildings to the oldest, 90 meters up, where you can also find a daring view on Rio San Romedio, where is not advisable to go if you suffer from vertigo.

Artistically San Romedio is a place of contaminations, where architectures of a certain period of time show paintings, altars and other periods’ oeuvres, in a mix with a special harmony, so observe every single detail can take some time.
In this particular atmosphere we want to remember that for many years the stairs’ walls were used as some kind of gallery full of ex voto, a massive quantity of stories and thanks that could strongly hit your imagination; now most of the ex voto are kept in a storage, maybe hoping to create a little collection for a museum. 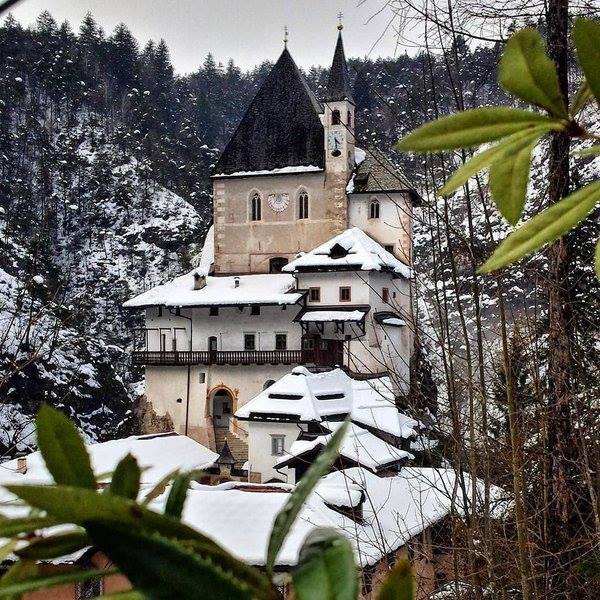 So, how did they built this particular place?

The origin of everything is the place of Romedio’s hermitage, in the highest part, where you can see the cavern the saint used as a shelter and a chapel where his relics are kept.
The origin of the place, as a place of worship of course, according to the most recent studies is around the year 1000. We have to imagine how, for about 500 years, this place was solitary and gruelling, reachable only through some kind of path and steps.
Probably along the path you could see worship niches, disappeared today, and in the lower part (today’s entrance) there should have been a little pilgrim’s shelter.

The cult of the saint was officially recognized by the Church around the year 1300 and from the following century it became very important. Thus, this is the moment when they started building the other 4 churches-chapels.

The first was the little church of San Giorgio, which was built circa 1480.The church is the first you can find on your right, going up the stairs. Imagine this little church lean against the rock from which you could go up, not easily, to the top of the spur. The chapel is also known as Clesiana, because apparently it was Cles’ baron, grandfather to Bernardo Clesio, who wanted it.

A few years later, in 1514 they built the little church you can find on the left from San Giorgio’s, it’s the church of San Michele or of Santissimo Sacramento, wanted by the Thun Counts and the Spaur Barons, built in a higher place, it got closer to the top.

The so called Chiesa Maggiore is dated 1536 is the one on the highest point, near the original hermitage, that you can actually reach from the church; the bell tower belongs to the same period.
We can imagine that the access to the Chiesa Maggiore was already improved by then, but the later important interventions, those that gave the sanctuary its current look, were only made in 1700. 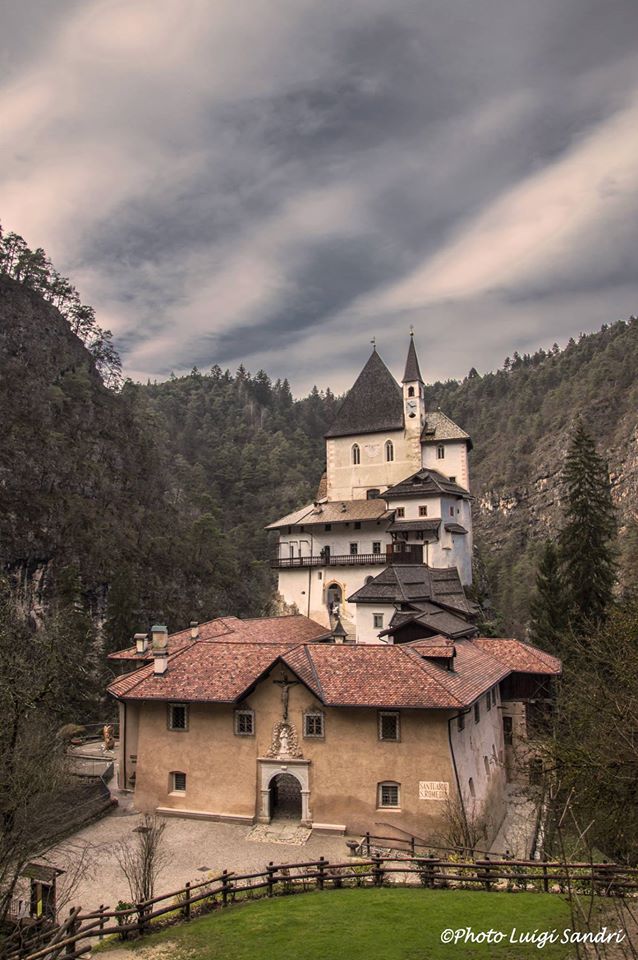 In the 18th century the lower floor spaces were modified, the ones to gather the pilgrims, the stables, the barns and the storage; in this period were built the first floor apartments, the walkway, the sacristy and the library. Still in 18th century they covered the second part of the stairway and it was enriched with niches with images of the passion of Christ. This was an intervention that made the sanctuary look like a sacred mountain.

Still, at the end of the 18th century were built the places over the little church of San Michele (Clesiana) and the arch that frame the stairway.
The Addolorata‘s church is in front of San Michele‘s in the first part of the stairs on the left, and it’s the last one in time order, built after the First World War as ex voto to the Virgin Mary for the rediscovered peace after the tragedy of the devastating war.

If you have a good imagination you can see the sum of the interventions that created the current sanctuary with its five little churches, the junctions, the apartments and the 130 steps that today create just one place.

San Romedio is a journey through time, that you can make in both directions, perhaps seeing something different each time.

To reach San Romedio in Val di Non:
from Sanzeno‘s square where you can see Casa de Gentili, you have to turn right, take the paved road, continue through the apple fields and then in a tight canyon where you’ll find Rio San Romedio, after about 3 km you’ll arrive at the sanctuary’s parking lot.

In summertime a bus brings the guests from just outside the town of Sanzeno to the parking lot, where you can walk to the sanctuary.

There is also the possibility to walk the path of forre di San Romedio, a path cliff-sided on the canyon and it’s built on a former aqueduct made at the half of 1800 to bring water.

This article is translated by 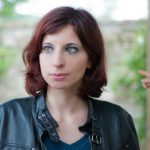 Intrigued by the world and by its stories, I’m passionate about foreign languages and forgotten traditions. I love the mountain and I spend my days dreaming about the snow and far away countries.

I Love Val di Non by www.ilovevaldinon.it is licensed under a Creative Commons Attribution-NonCommercial-NoDerivatives 4.0 International License.